TTFF offers an incomparable opportunity to children and their families by providing therapeutic recreation, specialized support and resources.

The Taylor Family Foundation’s Mission is to preserve the wellness and enhance the quality of life for children in Northern California living with life-threatening and chronic illnesses, developmental disabilities and youth at-risk through unique therapeutic experiences and support. 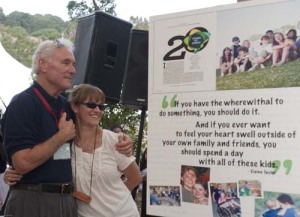 • In 1990 Barry and Elaine Taylor held a simple fundraiser in the backyard of their home to garner support for children with little or no resources.

• At the time, there were nearly 1,000 Bay Area children living with HIV/AIDS. The Taylor’s decided to focus their fundraising efforts on these children. They started The Taylor Family Foundation (TTFF) to support clinical programs, social programs, holiday events, summer field trips and activity days for these children

• TTFF became aware of a one-week summer camp that accommodated 35-40 HIV/AIDS children each year. Only the most ill and fragile children were selected to attend. Determined to make outdoor adventures possible for more children to experience, TTFF decided to build their own camp for children with HIV/AIDS.

• It took more than a year, but thanks to a long-standing relationship with the East Bay Regional Park District (EBRPD), TTFF found the right space – a wonderful 138-acre property in the Livermore Valley.

• EBRPD had planned on building a “sustainable science education camp” on the land that would be used during the school year. Since TTFF only needed a camp on weekends and in the summer, the two organizations partnered to raise the nearly $7 million funds needed to build Camp Arroyo.

• Construction began in 1998, and by spring 2000, the dining hall, swim complex, six duplex cabins and site infrastructure were completed.

• When Camp Arroyo opened its doors in 2000, there were only 200 Bay Area children with HIV/AIDS. Although halting the spread of HIV among children was a dream come true, the reality was that TTFF wanted to fill its 144-bed camp facility.

• TTFF decided to open up Camp Arroyo to children with a variety of life-threatening and chronic illnesses, developmental disabilities and youth at-risk. During the summer months and several weekends throughout the year, the camp is a haven for children and their families to enjoy together.

• From September to June the YMCA directs an excellent outdoor educational experience that introduces 4th, 5th and 6th graders to important concepts about science, nature, and sustainable living.

TTFF offers an incomparable opportunity to children and their families by providing therapeutic recreation, specialized support and resources. Located on 138 acres of beautiful land nestled in Livermore, CA, TTFF’s camp hosts a racially and socio-economically diverse group of 3,000 campers with chronic medical, developmental disabilities and youth at-risk for over 30 camp sessions throughout the year—at no charge. Now in our 3rd decade, we have served more than 45,000 children, providing support to nearly 80,000 families in Northern California 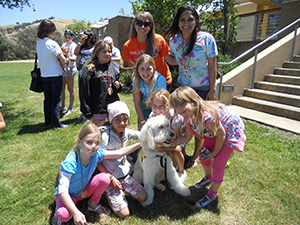